Sometimes when you are drafting a Tweet your creativity can get the best of you. I wanted to say a lot in as few characters as I could and after the tweet, I realized I had a catchy phrase to share beyond Twitter. Does that ever happen to you? Let me explain. 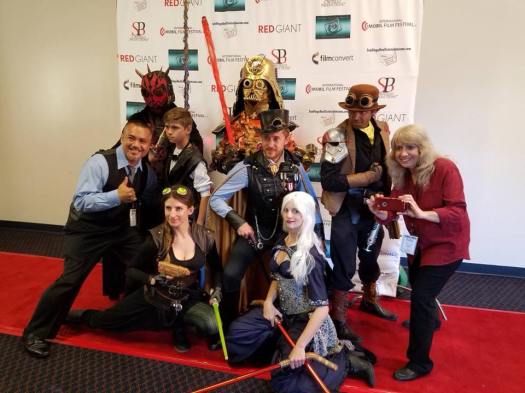 For years, I have been very passionate about democratizing filmmaking for everyone regardless of age all over the world and I realized smartphones were the vehicle. With just about everyone in our planet having access to a mobile phone with a camera we are able to share stories with each other all over the world. There is a lot of potential with this concept. One of the potentials is the educational factor in storytelling through film.

When you watch a movie, you will most likely remember scenes for the rest of your life almost as if you were a part of it. The film and video you watch basically occupies all of your senses like visual, hearing and even your other senses which are somewhat subconscious. Films have brought empathy and are educational, as well as entertaining. They can make us laugh and cry, feel anger and many other feelings. I realize music and books can do that as well, but it requires us to focus on it wholeheartedly to enable that effect. Films and videos can capture our attention and keep us in a moment inside a story until it wants to release you. Unless it’s poorly crafted, of course.

Click to Play. It’s very obvious we are natural consumers of media. We click to play a video or a song really. But we are more naturally consumed through video as it not only captures our auditory senses but our visual as well and in turn…well, I already explained what it does. Think of youth. Children of all ages, even younger than one year, have already learned to click on your phone screen when they see the icon for play in order to play a video. Seriously? Seriously. I am not advocating this. I am merely stating a fact. The generation of today and tomorrow has a different environment to grow into and I am not going to judge what is right or wrong until someone gives me the keys to their time travel machine so I can witness the results. I know that we all grew up with television and movies and we are more capable of creating them than we realize. I tell people all the time, to just try it and I love it when they do because they find out how awesome they are and that they are capable of doing something they believed they could not before trying it out. So allow me to be the make-a-movie pusher! Try it, you will feel good about yourself.

Play to Create. What if instead of consuming we told children to create what they consume? Thinking books? Sure, why not? But you may really have to twist arms for that one. What if you tell your kid they can use their smartphone to make a movie? Do you know what a cosplayer is? They are people of all ages and walks of life who dress up as characters of all sorts and even create their own. They are usually found in conventions and events. They are even bringing happiness to fans who are children with disabilities or those who are very ill. But kids are natural cosplayers. Who doesn’t remember the cape-towel from their childhood, for example? When a kid plays out a scene in front of a camera and then watches it they usually say, “Let me try again.” Okay, that is awesome! That means the child desires to do it better next time by trying something differently or new. What if the theme of their video was educational in purpose? That will need guidance but the value of what they will learn from researching their topic and putting it into an edited video is a treasure. If you met someone who has worked on documentaries of any sort, they will tell you they shoot interviews and B roll for hours before they end up with an edited video which is only a few minutes in length. The rest is knowledge. It is consumed by them and processed in a way to divide into two bins: Keep and Discard. We don’t erase what we process in our minds. So we really are learning from what we discard as much as from what we keep.

Click to Play or Play to Create. I want everyone to play to create movies, selfish me. I know everyone is full of amazing stories. What you need for a great film is not a particular camera or a bunch of money, it’s a good story. That is the first step to filmmaking. Once you have that, you may find a smartphone will work well as the camera to turn your story into a film. And what do you do with a great film? Any film? You share it. And I created a platform years ago where you can share your film with the entire world through an international film festival and it’s open to humans of all ages anywhere in the world who shoot with mobile phones only. I hope you will try it. You will feel better. And maybe, you may just turn yourself into a smarter and more intelligent human being. Oh, and I do warn you that a little fame as an international filmmaker won’t hurt either.

Our Mobile Feature Film Competition deadline is this month on October 19. All films must be shot with phones, of course, and be between 40 and 80 minutes in length. The Mobile Short Film Competition deadline is next month on November 19 and must be one to five minutes in length. Rules are here: Submit Your Film to IMFF 2018 in San Diego. The red carpet is in your pocket!

When I went to Twitter to promote our film festival’s open for submissions I wanted to emphasize that we are open for all ages, not just for adults. I know a lot of people believe kids who are using smartphones are damaging themselves because they only play games and videos. I don’t believe that to be the case but I think that if you want youth to not just use their phones to consume, as most people think — then ask them to create with them.

Susy Botello aka Susan Botello is in San Diego, California.